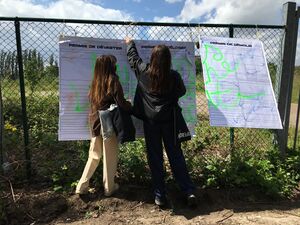 The Media pole is made up of a set of theoretical, technical and practical courses including the multidisciplinary workshop and the courses with an Orientation or Internship status from which the student builds his or her curriculum, and where the boundaries between graphic design, typography and digital practices are constantly questioned. To do this, the student follows several workshops, including the one for his or her Orientation and others, whether or not they are related to this Orientation. Depending on the level, these modules are assigned or optional:

In B1, a common core is organized into 6 modules spread over the 2 quarters that all students in the pole follow at specific times in the calendar. These modules offer learning opportunities in order to raise awareness of different practices and to ensure a series of basic skills common to all the orientations of the department.

In the second semester, the student follows the Orientation linked to his or her choice at the beginning of the year and presents a jury that testifies to both his or her career path and the choice of Orientation.

In B2/B3, the Orientation is now made up of 2 entities composed of 3 hours of fixed Orientation + 3 hours of more specific modules to be chosen from one's own Orientation or from another of the Pole.

In B2, B3, a student enrolled in Typography takes 3 hours of the Fixed Orientation Typography during the year and chooses one of the 3 modules offered per semester and the others at a rate of 3 hours per week. These modules are coloured by the different orientations. A Typography student can decide to always choose the modules related to his or her Orientation (1 Typography tinted module each term) or choose to take a module tinted more towards Graphic Design or GVC/Digital Practices. Most courses are given at the same time to B2 and B3 students, and change every other year so that B3 students do not have the same course menu twice.

The orientation invites to establish connections with the discoveries and the knowledge being acquired, both theoretical and plastic. But also to introduce new research parameters linked to the orientation which tends towards an experimental and critical practice. Different processes are set up in the dynamics of the course to develop, in each of the projects, a particular intention. Discovering as we go along the ways of functioning, the means necessary to progress and develop a project by affirming a decision. Experimentation with tools and media is part of the development of projects. They are not considered as technical tools but as engines that can accompany or engage a thought process. The courses are enhanced by graphic and transversal references, whether or not related to the projects, in a spirit of sharing and discovery.

The main objectives of the first year course are

- To think and work on graphic design, not only as a way of transmitting forms, but also as a subject to think about and a way of thinking

- To consider this practice as an exceptionally broad and generous playground

- To discover and exercise, in this framework, processes of deconstruction and construction

In the second year, the method is above all centered on experience, on "doing" and on the active look at what emerges. Work proposals will allow students to continue learning the fundamentals of graphic design with the help of analog or digital tools: the practice of typography, the fabrication and reappropriation of images and signs, the work of color and forms, the relationship between texts and images, editorial work, research related to space, the development of singular writings, collaborative work.

The main objective will be to lead students to engage in reflection and to develop a point of view through a practice based on experimentation. If it happens to work on a concrete request (a poster, a publication, participation in a contest), how can it aim at the outcome of a proposal where the standard supports and contents can constitute a space of questioning and research rather than a simple support of communication.

In the third year, the practice of graphic design will take a critical look at both the tools and the support (medium) as well as the view of our society (content). Graphic design is considered as a practice linked to the development of social, cultural, ecological, economic, scientific or political themes. The graphic designer, actor rather than author, has an active and collaborative role in the world in which he evolves. To evoke, reveal, denounce the world that surrounds us. Reacting to what touches us, revolts us, enthuses us, moves us, and taking a singular look, whether humorous, ironic, poetic, utopian, cynical, realistic or provocative.

The main objectives will be the ability to develop a relevant, concrete and autonomous graphic work, i.e. "editable" in the broadest sense of the term, whether it is a book to be produced, an image, a text to be displayed or a graphic object to be installed... But also to develop an eye and a critical sense, to be aware of one's responsibility as an actor in the cultural world in a constantly evolving social, political and artistic context. To be fully committed to a practice where the notions of pleasure and passion are present.