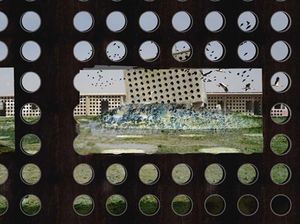 “Consider the term “shooting back” that connects the visual field and the field of combat, the camera and the gun. One might say that all these kinds of techniques of extended testimony and mapping should be abandoned because these are techniques born to serve power ; but I think we should rather extract them from the mouth of the beast and radicalize them.”

“Give a voice to the voiceless” is one of the responsibilities that is traditionally associated with political and humanitarian activism : to provide testimony of the concerns and struggles of those who all too often remain silent and invisible, those who are regarded within the global socio-political order as “outside” or “surplus”. Yet the status of testimony has undergone some remarkable shifts in the past decades. First of all, the field of humanitarianism and human rights that served as an independent form of engagement with the pains and sufferings of this world in the 1960’s and the 1970’s, has been gradually pervaded by other kinds of forces and strategies : political-military in the 1990’s, legalistic in the 2000’s. In this context, the role of testimony, whether oral, literal, visual or audiovisual, has been superseded by the use of medical and forensical data, which provide another kind of testimony, one without witness. These entanglements and shifts are all part and parcel of what Eyal Weizman has called our “humanitarian present”, a present characterized by a growing ethical indistinction between fact and law, where all judgement is subsumed to an economy of violence and a systemic logic of “lesser evil”, and all division is replaced by a rationale of negotiation and calculation. In this Dissent ! session Eyal Weizman will talk about this contemporary condition in which technologies of humanitarianism and human rights collude with military and political power, with a focus on the role of audiovisual technologies in relation to the paradigm of victimization and the politics of lesser evil, and the status of forensic aesthetics as site of interpretation and contestation.

Princeton Global Scholar Eyal Weizman is an architect, professor of spatial and visual cultures and director of the Centre for Research Architecture at Goldsmiths, University of London. In 2011 he set up Forensic Architecture, a research agency that provides architectural evidence in human rights cases and war crimes trial. His books include FORENSIS. The Architecture of Public Truth with FA (2014), Architecture after Revolution with DAAR (2014), Mengele’s Skull with Thomas Keenan (2012), The Least of all Possible Evils (2011), and Hollow Land (2007).