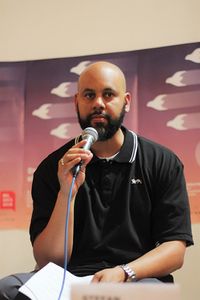 Greg de Cuir Jr. (US) is a writer and film curator based in Belgrade (Serbia). He is the selector for the Alternative Film/Video and Beldocs festivals (both in Belgrade). As an independent moving image curator, he has organized programs for the Institute of Contemporary Arts in London; the National Gallery of Art in Washington, D.C.; the Museum of Modern Art in Warsaw; Los Angeles Filmforum; goEast Wiesbaden; Experiments in Cinema in Albuquerque; and other institutions. Together with Kevin Jerome Everson, Greg de Cuir Jr. was the programmer of the 2018 Flaherty Seminar. He is the managing editor of NECSUS: European Journal of Media Studies and has published writing in Cineaste, Jump Cut, Festivalists, Art Margins, La Furia Umana, Politika, and other journals and volumes.

Since 2014, Greg has been the curator of the Avant-Noir screening series at ICA (London). Avant-Noir was conceived to celebrate the work of artists active in this new century who are struggling for a new value and a new perspective placed on the black image in film and video art. These essential films and videos and the artists who created them are in some cases woefully underseen, in other cases known but not celebrated nearly enough. Avant-Noir platforms contemporary film and video work by African and Transatlantic African artists, also presenting other artists who are concerned with visual representations of black culture in its various complex forms.