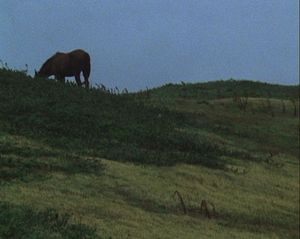 In collaboration with Courtisane & erg (école supérieure des arts). In the presence of the artist.

One film shot in South Korea, another in Cuba. They are not anthropological films, nor narrative documentaries or film essays, but they are certainly concerned with foreignness and difference. prendas - ngangas - enquisos – machines was mostly filmed in the hilly communes of Yateras, searching for long disappeared clandestine settlements, so-called palenque, where African slaves, Taínos and Chinese forced laborers freed themselves from colonial violence. No, I am not a toad, I am a turtle ! is the result of a research on the Korean song form of ‘pansori’ music and documents a journey through hinterland villages and wooded mountains, along shipping lanes and trade routes between China and South Korea. Both films ask whether it is possible to communicate something of the soul of a place, steeped in histories of violence and dissidence, without relying on didacticism or storytelling, without taking recourse on hierarchical distinctions between the ordinary and the extraordinary, the macro and the micro, the animate and the inanimate. Is it possible to escape from the systems of signification that constitute foreignness, as well as the heritage left behind by colonial anthropology, without getting detached from the palpable realities of the world ? What if there was a way to approach the foreign by relying on the affects of the world that pass through us, giving way to sentimental cartographies, mapping out nameless intensities and collective sensitivities, leaving space for the non-human, including vegetables and animals that had to colonize the new land together with their humans ? In these film, these places do not appear as an “outside” to our inside, but as a sensible texture without anchor or vanishing point, where humans are a part of the composition rather than the principal element.