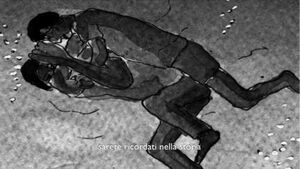 session in 0P09 and live streamed on : https://youtu.be/zzbkOVaPhhc

Dagmawi Yimer will present his work and his practice of filmmaking, storytelling and activism. This session, open to all students, teachers and guests, is part of a series of guests lectures, in the frame of the workshops “Animation as contre-champ” facilitated by Francesca Cogni.

“Dagmawi Yimer gives migrants a voice with his cinematic works—well aware that the documentation of their stories is often neglected and forgotten. Following on from his own biography—the director, who was born in Addis Ababa, arrived in Lampedusa in the summer of 2006 and is involved, among other things, in the ‘Archivio delle memorie migranti’—he focuses on the situation of migrants or racism in Italy. His short and longer film works stand in the aesthetic tradition of Italian political documentary films and focus on the oral and visual memory of migration. In 2010, Dagmawi Yimer returns to Lampedusa to capture the atmosphere on the island for his work Nothing but the sea. Due to its proximity to North Africa, Lampedusa is the first destination for many migrants who flee across the Mediterranean, and the island is accordingly present in international media coverage, but also in the xenophobic propaganda of Italian politicians.

In Nothing but the sea, Dagmawi Yimer, who in 2006 only saw the island through the windows of the reception camp, confronts his own migrant history—but also that of others who fled—with the realities of the islanders. It becomes clear that the experience of migration, the departure and the hopes associated with it, as well as the sea, have always shaped the history of the island and its inhabitants. The shooting of Nothing but the sea in 2010 was marked by the agreement negotiated between the former Italian Prime Minister Berlusconi and the Libyan dictator Muammar al-Ghadhafi, which made it impossible for many refugees to cross the Mediterranean Sea.

ASMAT – Names in memory of all victims of the sea on the other hand, was realised in 2015 and addresses the experience of the terrible tragedies that took place in the Mediterranean from 2011 onwards, in particular the boat accident of 3 October 2016, in which 366 migrants lost their lives. The film mentions the names of all the people who died in the accident and reminds us that behind these names lie stories, lives and meanings.

In Waiting, his latest film, Dagmawi Yimer deals with the state of waiting that characterises the lives of so many refugees. It becomes clear that keeping people waiting is always a way to practice domination and power. The film starts from a conversation between the filmmaker and an anthropologist and explores the theme of waiting through the testimonies of three migrant men in Europe. The testimonies about waiting appear in different forms: letter writing, painting and poetic research. With waiting, Dagmawi Yimer’s intent is to integrate academic knowledge into migrant stories and make them accessible to a broader audience by a combination of words and images.”

The workshop explores animation as a possibility for contre-champ and couter-narration, revealing hidden images, which flips the point of view, and changes the dominant narration.

In 1942, Albert Camus wrote the novel L'Étranger, a story about Meursault, a man living in Algerie, who kills an Arab man. The story is focused on Meursault, the act he committed, the court.  The died man, a young Arab, not even has a name. He is an anonyme character, without history.  Kamel Daoud, an Algerian writer, published in 2013 Meursault, contre-enquête, a novel which tells the story of L’Étranger from the perspective of the brother of the killed Arab man.  Suddenly the protagonist has a name and a story: it is the story of Moussa, told by his brother Haroun. A mirrored story talking about the omitted part in Camus’ book, who was a pied-noir, born in Algerie form a French family in colonial times. Daoud tries to rebalance the story, giving a name, a body and a story to one of the main character of the novel.  This is not only a literary experiment, but also a necessary and radical change of perspective on colonialism and representation: give another point of view, listen to the other side of the story: the colonised.

Reflecting on colonial history and current representation of racialized and indigenous people in western society, the workshop will build an open laboratory to investigate together - through animation - the gaze on others, the relations with other’s stories, the positioning and awareness on colonial history affecting our society until today, in the construction of identities and systemic racism.

Animation can break the unique-narration, multiplying points of views and voices and perspectives on History and present time. Filling the gaps, adding contre-champs, details, voices, stories.  In a society where images are compulsory to “create” the reality of a fact which reverberates into political narrations, producing and showing different, forgotten, hidden images can radically change the narration of the history and of present time, assuming a political value.

We will also approach a methodology, the way of doing that. How do we, as artists and animators, face this? How do we position ourselves - with our background, privileges, tools, thoughts? How do we face the “otherness”? How to respect individuals, avoiding an extractivist approach - of informations, images, contents? To whom does a story belong? Our work as artist can not be neutral. It concerns many political questions. We are part of the process while we work, we do play a role, we may reproduce the system we want to call in question in our work.