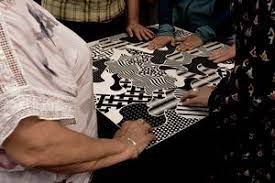 Tangible Natives is an experiment on how the resources of a tactile system of communication can contribute to a non-hegemonic system of embodied notation, for people with and without visual disabilities. During the three days of the workshop we will question the normativity of conventional notation tools, discuss the de-emphasizing of vision in regards to “reading” text and explore the manifold ways text, or any other form of collective expression, can be translated and stimulated by touch. We will get inspiration from surveying the tradition of graphic scores in contemporary music but also other forms of non-retinal expression with the goal to build together a collectively imagined system of graphic and tactile communication that can reflect the diversity of a community’s expression.

- Initially designed for users with visual impairment, Shapereader is a speculative, trans-disciplinary project that promotes an embodied, non-retinal, narrative experience. It is built on an expanding repertoire of free floating tactile ideograms (tactigrams) intended to provide haptic equivalents for all the semantic features, the conceptual functions and textual attributes of a tactile text. It was invented in 2015 with an ongoing outreach plan for raising awareness for a diversified audience, that has been unfolding in a variety of formats, contexts and collaborations.

The development of the general artistic, research and educational activities of Tangible Natives are part of Ilan Manouach’s residency at the Onassis Lab in Athens as Onassis Digital Fellow.

Ilan Manouach is a conceptual comics artist. He currently pursues a PhD at Aalto University in Helsinki (adv. Craig Dworkin) where he examines how the comics industry is undergoing historic mutations in the midst of increasingly financialized, globalized technological affordances of the XXIst century. He is mostly known for being the creator of Shapereader, an embodied system of communication designed for blind and partially sighted readers/makers of comics. He is the founder of Applied Memetic, an organization that researches the political repercussions of generative and automated content in the comics industry and highlights the urgency for a new media-rich internet literacy and the director of Futures of Comics, an international research programme that proposes to map the social, economic, racial and gendered forces that shape the industry’s commercial, communication and production routines. He is equally the curator of the Conceptual Comics selection for Monoskop and Ubuweb, and the initiator of Topovoros, an hyper-local publishing initiative based in Athens. His work has been written about in Hyperallergic, e-flux, World Literature Today, Wired and Kenneth Goldsmith’s Wasting Time on the Internet. When not in stealth mode, he is an Onassis Digital Fellow and a Kone alumnus.