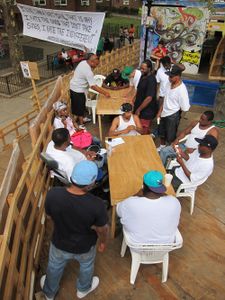 "Commissioned by Dia Art Foundation, Gramsci Monument is a new artwork by Thomas Hirschhorn, taking place on the grounds of Forest Houses, a New York City Housing Authority development in the Morrisania neighborhood of the Bronx, New York. Gramsci Monument opened on July 1 and will run through September 15, 2013. It is open seven days a week, from 10 am to 7 pm.

Gramsci Monument is the fourth and last in Hirschhorn’s series of “monuments” dedicated to major writers and thinkers, which he initiated in 1999 with Spinoza Monument (Amsterdam, the Netherlands), followed by Deleuze Monument (Avignon, France, 2000) and Bataille Monument (Kassel, Germany, 2002). This fourth monument pays tribute to the Italian political theorist Antonio Gramsci (1891–1937), famous for his volume of Prison Notebooks (1926–1937). Gramsci Monument is based on Hirschhorn's will “to establish a definition of monument, to provoke encounters, to create an event, and to think Gramsci today.”

Constructed by residents of Forest Houses, the artwork takes the form of an outdoor structure comprised of numerous pavilions. The pavilions include an exhibition space with historical photographs from the Fondazione Istituto Gramsci in Rome, personal objects that belonged to the philosopher from Casa Museo di Antonio Gramsci in Ghilarza, Italy, and an adjoining library holding 500 books by (and about) Gramsci loaned by the John D. Calandra Italian American Institute in New York. Other pavilions include a stage platform, a workshop area, an Internet corner, a lounge, and the Gramsci Bar—all of which are overseen by local residents.

Hirschhorn has also created a website as part of the Gramsci Monument. It is a platform offering texts, notes, pictures, and videos documenting the process of the artwork, from its earliest sketches. The website features lives radio streaming, and will be updated daily with documentation from the daily events and philosophy lectures, as well as archived editions of the newspaper."