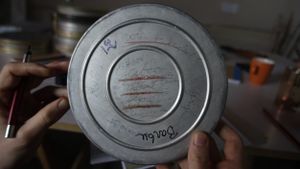 2016 an erg-workshop by Alexander Schellow and Anna Seiderer on the Cinematheque`'s colonial cinema archives led to an ongoing collective process, finally to the initiation of a collective, that we would like to share in the form of a performative screening, together with erg students and general public.

The Greyzone Zebra collective, founded in 2016, is composed of artists and researchers. Together they explore contemporary forms of the transmission and the rewriting of colonial histories through private films made between the end of the 19th century and the first hours of independence.

The artistic practices developed around these family archives make it possible to engage in a collective reflection on the processes of memory and oblivion that generate today these images, shot mainly in 8/Super8 and 16mm. The interest of this little-known film production lies in the diversity and spontaneity of its gestures and in the places given to them within the different family heritages of this history.

In 2019, WIELS will host three screening sessions during which the public is invited to take notes while observing the films, and then, a few moments later, to recall the projected images. These notes crystallize our different perceptions of images and constitute as such a singular material with which to engage in a collective reflection on our forms of contemporary rewriting of the colonial past.

Free entry - however subscription would be nice, as we have to calculate with a certain amount of participants Discussion in French